To view the November 2021 Board Meeting minutes, click here.


To view the December 2021 Board Meeting agenda, click here.

Members in Districts Two, Four, and Five may nominate a member from that district to stand for election at the 2022 Annual Meeting. Nominations will be open for the entire month of January.

A sample nomination form can be found here. 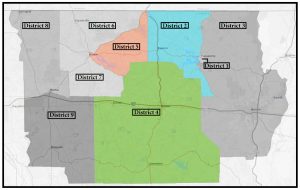