Nominations for directors in three of Claiborne Electric’s districts will be open during the month of January.

Members in Districts Three, Seven, and Eight may nominate a member from that district to stand for election at the 2022 Annual Meeting. Nominations will be open for the entire month of January.

For specific information on districts or election rules, please reference Claiborne Electric’s bylaws, which can be read at www.our.coop, or at either of the Co-op’s offices. Bylaws pertaining to districts and director elections can be found in Article IV of the bylaws. 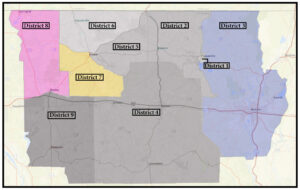